Note: The 7mm version has identical specifications except for using the 7mm chambered barrel unit.

Identification of the Johnson 1941 Rifle is quite easy to do. It has the standard US military dark, uncheckered, walnut stock and the upper handguard is made of perforated steel. The rotary magazine gives the rifle a 'pot bellied' profile. All metal parts have a blue black parkerized finish, however cosmoline may have shanged it to the same dark olive green parkerized finish as other US military rifles, the only metal part not parkerized is the bolt which has a polished steel finish.

The Butt Plate is made of checkered steel and has no provision for a butt trap to get at the cleaning kit stored in the butt.. The buttplate is removed by using the flat, screwdriver blade built into the cocking handle once it is dimounted from the bolt. Unscrewing and removing the buttplate reveals two recesses, one for the Springfield/Garand nickel plated oiler, and another where a spare parts package was stored.


Trigger and Safety Catch made from milled steel.

The trigger is grooved for grip and comfort. The safety catch is located at the front of the trigger guard. Positioning the catch to the left is the "safe" position and to the right "fire" position.

Rear Sight is made from stamped sheet steel and held to the receiver by a dove tail. 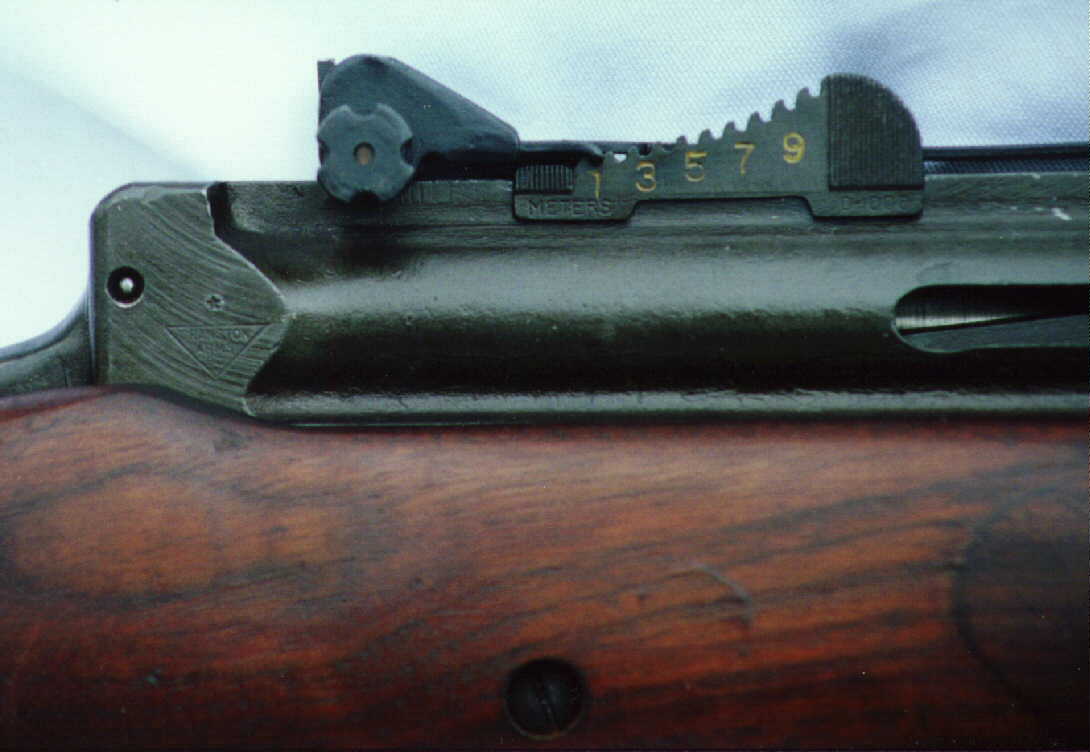 It is a graduated in metres for distance rather than in yards this was due to the large Dutch Govt. order which specified the sights were to be calibrated for metres. Cranston Arms never re-tooled to make sights in yards.
Adjustment is done by simply sliding the ramp back and engaging a 'tooth' on the sight in a notch in the slide. Windage is altered by a knob at the rear of the unit, moving the aperture either left or right.

The Receiver is 20 inches in length, made in two parts. The rear is made from a billet of forged steel and the front ventilated part made from heavy gauge sheet steel. The two parts were then electro-arc welded together in a special jig. It has the rifle's serial number stamped on top with the maker's name and Patent details. The Cranston Arms Logo appears on the right side near the receiver's rear. The ventilated upper handguard ( "The Radiator" as the manual calls it) is part of the receiver.

In this photo the wooden fore stock, magazine and ancillary parts are still in place on the receiver.

is a small knob which also holds the extractor in place. To actuate the bolt you have to lift the knob twenty degrees before pulling back. In its center is a small spindle which has to be pulled out to facilitate the removal of the handle from the bolt.

Magazine is loaded on the right side. Single rounds or five round '03 Springfield stripper clips can 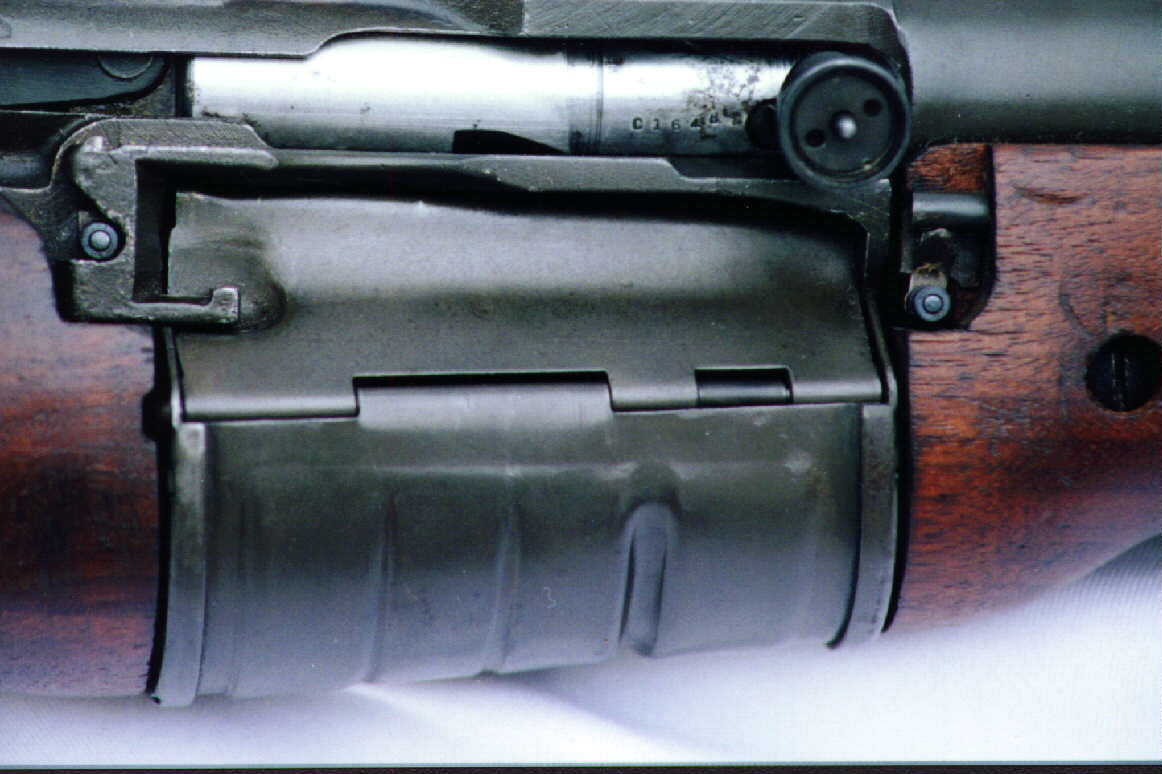 be used to load it.The receiver has lips machined into it to allow clips to be loaded (these can be seen in the photo on the left side - the magazine cover has a slight indentation to allow for them).

It is manufactured from sheet steel and has a spring- loaded cover to shield the inner mechanism from dust and the elements. Unloading the weapon is done by pressing down on the cover and a round will be ejected into the palm of the hand from the magazine.

Barrel Unit contains the bayonet lug and frontsight. The barrel is 22 inches in length. At its rear is the locking bushing.

The locking bushing fits over the end of the chamber, and the 8 lugs on the bolt fit into corresponding grooves on the inside of the bushing.


The bayonet lug is a pyramid shaped device held to the barrel by two cross-pins and is situated 3 1/2 inches from the muzzle.

The front sight is a post, protected by two ears. These ears were sometimes chopped off by the marines, due to they could give a bad sight picture in low light conditions and made it difficult to aim the rifle correctly. 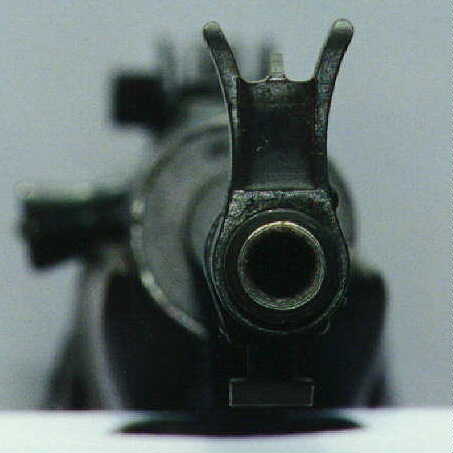 Detail of the muzzle and front sight (note bayonet lug below barrel).

Other than the Bayonet and sheath there are no other US military accessories for the Johnson Rifle. The Dutch did however did utilise a sheet steel sight hood which slipped over the front sight (similar to that used on Mauser rifles).

It has been reported that Johnson Rifles were issued with a small waxed paper envelope containing a replacement extractor, firing pin and hammer spring - all heavily greased for storage. These 'spares packages' were found in the lightening cut located under the buttplate.

The standard M.1923 pattern webbing cartridge belt was to be used with this rifle. Slings most likely to have been used were the M.1907 leather sling and the M.1923 canvas sling. It is possible that the M1 green canvas sling may have been used as well.

For description of the manual see the publications pages

There are other items available to collectors concerning Johnson Automatics., such as product leaflets, half-size cutaway diagrams and cartridge comparison.posters.

A Johnson Automatics products leaflet (right) from pre-1941. The handwritten name is that of John Howard, the Company Executive Vice President and Treasurer, written in his own hand. Used by Howard as a calling card when this leaflet was presented to Hoffman Arms Co., Amarrillo Texas. Hoffman Arms had been approached by Johnson's to become sub-contractors to make 7mm rifle barrels for the South American contract rifles.

Back To the Top