Unfortunatly not too many authentic photos of troops using the Johnson 41 rifle in combat exist today or if they do have not been discovered yet. There are however quite a few showing the 1941 and 1944 LMG in use.

The US Army tested the Johnson Rifle exhaustively in 1938 at Fort Benning, comparing it's functions with early "Gas trap" M1 rifles. These tests found a few weaknesses to the overall Johnson design but the army was impressed by the concept, inviting Mel. Johnson to re-submit the design for further testing at a later date (see elsewhere on this site). With the failure of the design to win acceptance with the US Army and later the Marine Corps., Johnson successfully sold the rifle, now the M1941, to the Dutch for use in the Far East colonies with their Koninklijk Nederlands Indisch leger (KNIL - The Netherlands East Indies Defence Force) troops who were commanded from the Island of Java, in what is now Indonisia. The rifles and machine guns that were delivered saw extensive use against the Japanese before the Dutch colonies were overrun. The undelivered rifles and machine guns intended for KNIL use were now impounded at Cranston.

This large consignment of semi-automatic rifles and selective fire machine guns caught the eye of the USMC and a quantity of each were obtained from the embargoed stocks. 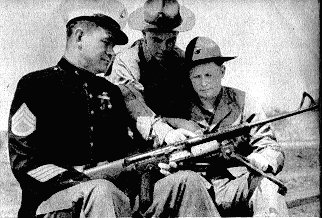 These weapons were used to equip the fledgeling USMC paramarine units.

The level of issue of Johnson rifles is not known from the data that details the LMG issue scale. 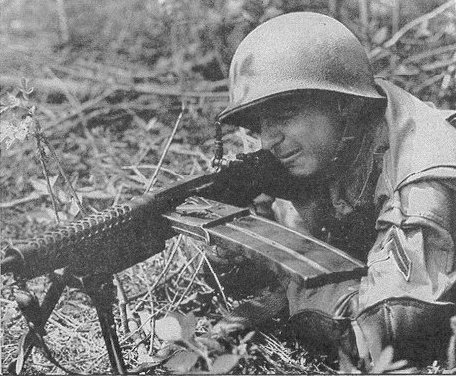 A photo from a 1943 copy of the USMC magazine "The Leatherneck" showing a USMC paramarine Corporal firing a 1941 LMG.

The USMC used these rifles and LMG's in their Solomon Islands campaign and for a short time afterwards until M1 rifles were obtained in numbers. An Interesting fact can be found in the 1943 edition of "The Blue Jackets Guide" were in the naval weapons section there is a picture and description of the Model 41 Johnson rifle . The text also states quite plainly that the M1 rifle was not a standard naval weapon, which adds another quirk to the Johnson story.

In mid-1942 125 LMG's were obtained by the Army's 1st Special Service Force from the USMC stock. The 1st Special Service Force (the famous "Devil's Brigade") was a 'special forces' unit formed from both US and Canadian army personnel and specialised in behind the lines and close quarter combat scenarios. The LMG's came from the USMC who allegedly received 2 tons of plastic explosive of a newly developed type called 'RS' in exchange for them. As Lt. Colonel Robert Burhans states in his book "The First Special Service Force" which is the official unit history of the 1st SSF, 'The Johnson weighed little more than the M1 rifle, and carried more fire power than the Browning, an ideal addition to a light, fast-moving combat unit. It was a profitable trade for the force; the Johnson, pound for pound, was the most valuable weapon it possessed.'

A 1St SSF "Forceman" firing the 1941 LMG at Anzio. Even in such a grainy photograph the weapon is instantly recognisable.

During the 1960's invasion of Cuba the CIA armed the cuban exiles who took part in the "Bay of Pigs invasion" with large quantities of both Johnson 41 rifles and '41 LMG's. It is hoped that a still photo can be obtained of this, as movie footage exists showing these irregular troops with the weapons has been seen by a number of people who have told me of this fact.