Telling A Genuine Johnson Dagger Bayonet From A Reproduction

Reproductions of the Johnson Model 1941 'Dagger  bayonet' first showed up a couple of years ago. The company that has these is selling them as REPRODUCTION BAYONETS & SCABBARDS. An original Johnson metal bayonet and repro metal bayonet are close in resemblance BUT there is a difference. In the scabbards, for example, there is a definite difference.With this article I will show these.

It was only a matter of time before someone tried, and apparently did succeeded in pawning off a fake Johnson Bayonet as the genuine article. An original bayonet can sell for anywhere between $250.00 to $350.00 depending on condition. The reproduction sells for $99.00 with the scabbard. The scabbard itself sells by itself for $30.00.

This first picture shows a group of Johnson bayonets and as you can see the center bayonet scabbard is definitely different than the rest.

Notice the width difference between the shank and taper of the repro compared to the same of the original scabbards.  The repro scabbard has a straight cut at its tip that is open, the genuine one is sewn down completely ending in a conical tip.

I have done nothing to change the appearance of the repro bayonet and scabbard. The repro ones are marked with an arrow either at the top or the bottom in the photos to make spotting them easier.

At shows it may be mixed with other bayonets so there maybe nothing to compare it with.


This second picture shows the inside of the strap rivets that hold the strap to the body of the scabbard. 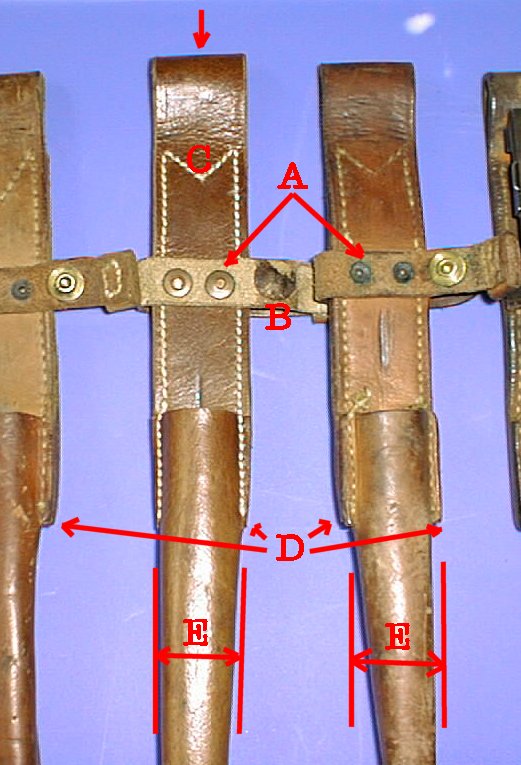 Notice the difference in the diameter of the rivet ends and backing plates(A). The hold down strap rivet back has a rough leather covering on it (B).

Also note the diameter of the repro tube shank to the original (E).

This picture shows the strap hold down rivet. The rivet is slightly taller and larger in diameter 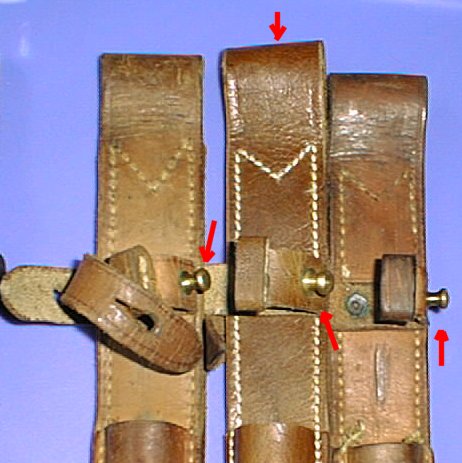 with the rivet head being  hollow.

This last picture shows the backside of the scabbards. Notice the thickness of the shank 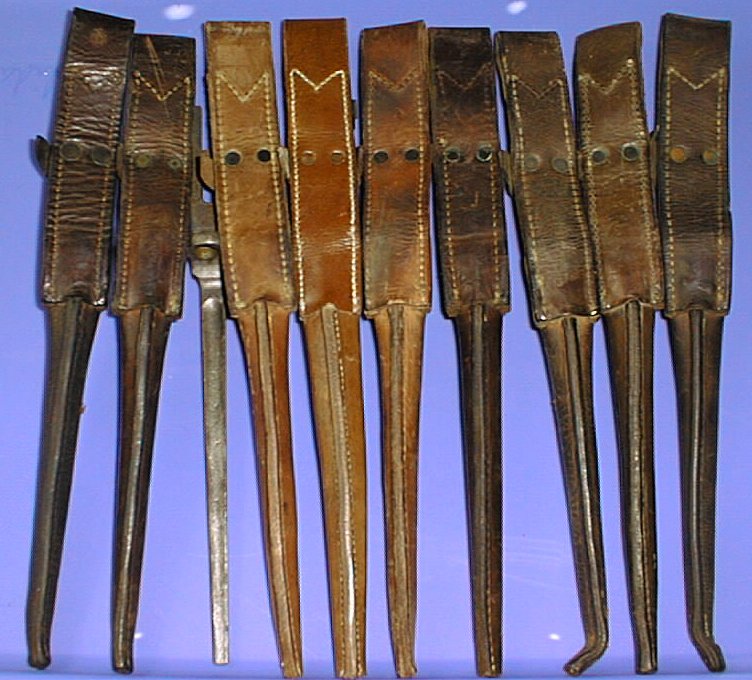 From the information and pictures provided I hope you can now spot a repro scabbard. The next section will deal with the bayonets.

This picture shows the attaching end of the Johnson bayonet. 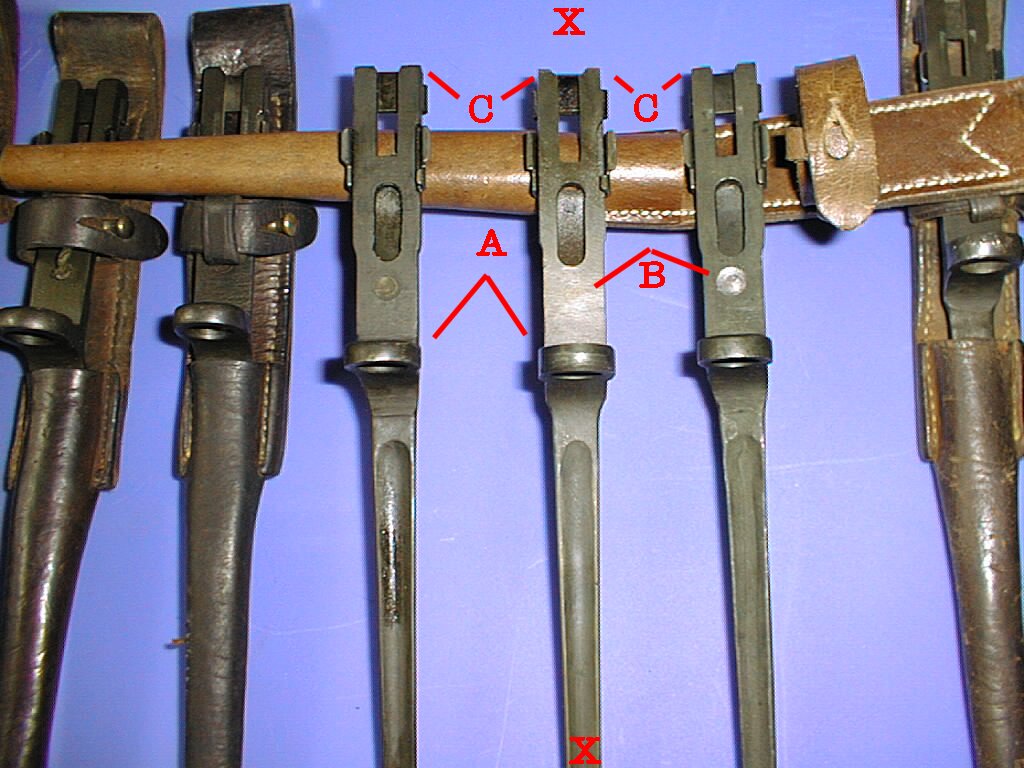 Notice the barrel ring thickness and square finish of the ring (A).
The rivet ends on almost all original Johnson bayonets will have some sort of indentation to show where the rivet ends. The repro has been finished flush leaving almost no markings (B).
The ears on the bayonet lug spring clip are squarer cut and formed differently than the originals (C). The overall finish on the repro it is better than a wartime production bayonet.


"X" = Repro Bayonet in all of these photos 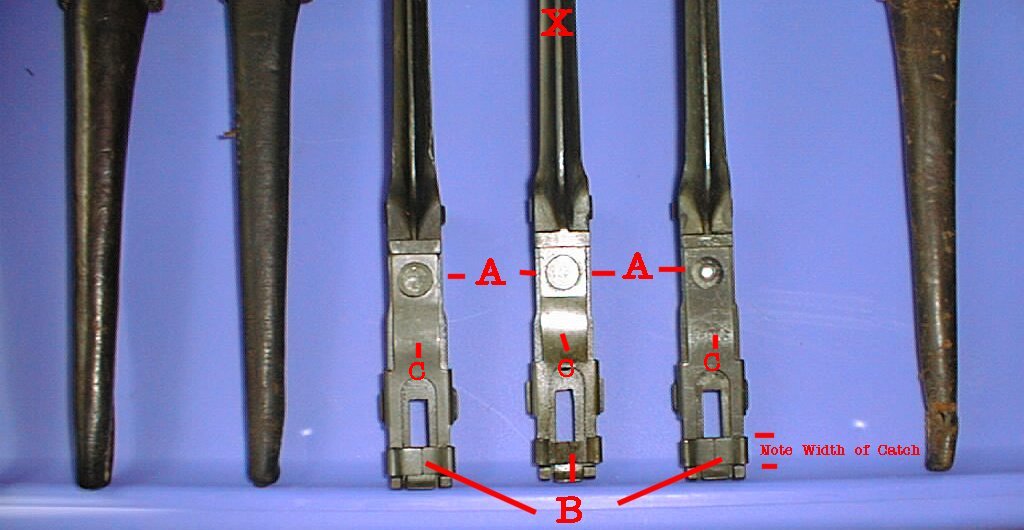 Notice how flat the rivet is and how rounded the originals are (A).


Note the width of the spring clip that slides passed the bayo lug (B) and the bend of the spring steel beneath the flat rivet (C).

If a bayonet you find has any one of these differences shown here and it is for sale as an original, my advice is to leave it alone.  The repro bayonets and scabbards are well made and are great as a substitute for the real thing.  However,  don't get caught out by resellers trying to pass them off as genuine. Hopefully I have given you the knowledge to know the difference.

This guide is meant as an overview for collectors and is to be used to assist in deciding whether to purchase an item, it is not to be taken as 'gospel'.

There are slight manufacturing nuances in original bayonets and scabbards but they are not as obvious as the differences I have pointed out between the original and the reproduction ones.

One more thing - none of the Johnson bayonets were ever marked with any numbers what so ever from the factory, nor were the scabbards.